I left Rush Limbaugh behind a long time ago. In high school, I served two years as the cartoonist for the school paper and I was known for working signature catchphrases like “Ditto” or “Rush is Right” into every editorial cartoon. Sometimes it was subtle, but most of the time it wasn’t. I still can’t believe they let me get away with it.

By the time I graduated from high school, I left Rush behind. I saw something in his rhetoric that reminded me of what the scriptures call “priestcraft,” and I came to think of him as someone who was less about ideology and more about himself. It didn’t take long for me to start seeing political parties the same way. When it came time to register to vote, I marked myself down as an Independent. I never looked back.

My value system still leans a bit to the right, probably owing a lot to my upbringing, and also my religion. I’ve never been able to completely buy into Progressivism, even though one of the tenets of my faith is an emphasis on change and progression. Though I don’t believe in being stagnant or getting things back to the way they were in “the old days” when, for example, women weren’t allowed to vote and redlining condemned multiple generations to poverty, I’m also wary of the constant drumbeat for change, which can become a moral value unto itself at the disregard of what I believe to be moral constants. We should be moving forward, always, but in the right direction and for the right reasons.

One of the big problems I’ve always had with Progressivism is something I’ve termed “temporary exceptionalism.” It’s this idea that in order for social reform to happen then we must make special allowances for underprivileged groups or bring down the majority in order for the minority to get a leg up (I’m oversimplifying a bit, but quotas would be the most basic example of what I’m talking about). I don’t believe in creating opportunity by taking it away from others. I don’t think we’re playing a zero sum game here and I think, as difficult as it would be to achieve, it’s possible for everyone to have equal opportunities at the same time. I don’t think you get to equality by lifting some above others the same way you don’t get it by pushing anyone down. Otherwise, you’re at risk of swinging the pendulum too far and that becomes another kind of injustice.

Years ago, when I first heard the term “Black Lives Matter,” I rejected it immediately. My first thought was, no joke, “Hey, wait a minute, all lives matter.” I saw Black Lives Matter as more of what bothered me–of lifting up one group over another. I saw “BLM” as saying, as I believe Progressivism often does, “The only way we’re gonna make this right is by giving more advantage to these folks over here than to those folks over there who have had it for way too long.” Elevating black lives over white lives? No, that’s not right—same way the other way around isn’t right. I saw Black Lives Matter as a different kind of inequality and isn’t that what we’re all supposed to be fighting against? My wife and I had a lot of discussions about this, debating it back and forth. I was on one side, her on the other, supporting #BLM. Both of us operating in good faith and trying to convince the other of what was right.

I was, quite obviously, wrong. As a concept, Black Lives Matter isn’t about excluding anyone, it’s a raising of a hand to be recognized. It’s a righteously angry plea for acknowledgement that black lives are the same as everyone else’s–they matter. All lives matter THEREFORE black lives matter, too. This is basic, and I missed it because, try as I might to be an independent thinker, I got infected by a rhetoric that said a particular advantage was trying to be achieved when that wasn’t the case at all. It never was.

It has to be said that Black Lives Matter because too many people are behaving as if they don’t. Particularly, unfortunately, people who have power. Black Lives Matter is a spotlight on an injustice and a plea for change–a specific, righteous change.

The best explanation I’ve seen going around (and that seems to be convincing a lot of Conservatives) is this one I saw on Twitter: 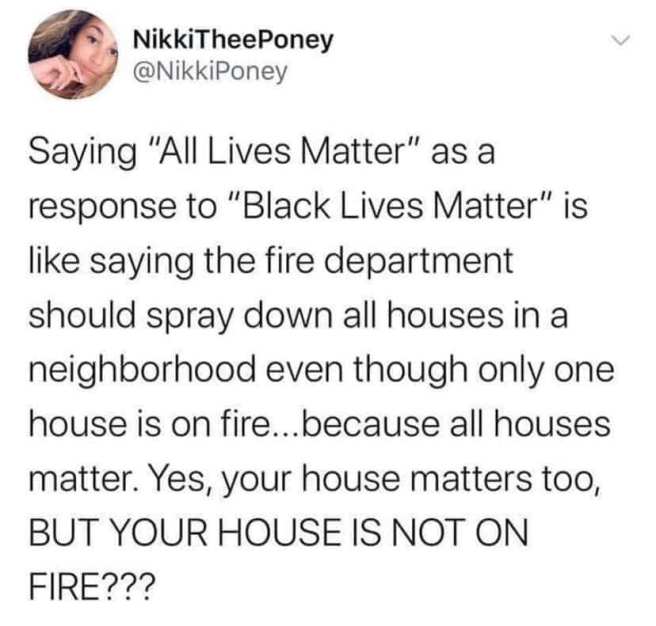 It’s really as simple as that. My house isn’t on fire. I don’t have fear when I interact with white, bigoted, racist people, whether they have power or a gun or not, because they don’t see me as their enemy and they don’t see me as less than human. But if I were black? George Floyd and Ahmaud Arbery and so many before them prove there is a real reason to fear. It’s the fear of death, and, after all the strides towards equality we’ve made in the past 60 years, we should not be okay with anyone walking around in our country with the fear of death for the way they look, a thing over which they have no control and is of no consequence to their value as a human being. What inequality could be greater?

Another way of getting at this same idea (and this is another example I’ve seen going around) is to look at what Jesus doing when he left the 99 sheep to go after the one. He was, essentially, saying, “Lost sheep lives matter.” The 99 were safe, so he went after the one that wasn’t. White lives are not imperiled in the same way black lives are, so #BlackLivesMatter.

I’m encouraged by the sea change that’s happening. People are waking up to what Colin Kaepernick and others like him have been trying to say for years, and it’s important for white voices to rise up with them, so I’m adding mine.

I believe in change and progression. They are at the heart of the Gospel of Christ. It gives me a lot of hope in our country’s potential to heal what are some very old wounds when I see the movement that’s sweeping this country. To see mayors and governors and religious leaders and what seems like the majority of people in my social media feeds throw their weight behind Black Lives Matter is an encouraging thing and a positive sign at a time when it seems like we’re more divided than ever.

To anyone who also struggled at one time or another with #AllLivesMatter vs. #BlackLivesMatter, I would encourage you to add your voice. You’re not alone. However you arrived at your change of mind, it’s an important story to share. So, share it. This is the time.

Brock Heasley is a writer, filmmaker, and artist. A former Art Director, he is the writer of the memoir “The Other Side of Fear: A True Coming-of-Age Story of Murder, Forgiveness, and the Peace Only Faith Can Bring,” the illustrator of the YA novel "Paper Bag Mask,” the creator of the comic, "The SuperFogeys,” and the award-winning filmmaker behind the short film "The Shift.” Brock lives with his wife, three daughters, three dogs, and one cat in California. Brock didn't want a third dog, but his girls made a pretty killer Power Point presentation and he didn't want to look like a jerk. View all posts by Brock